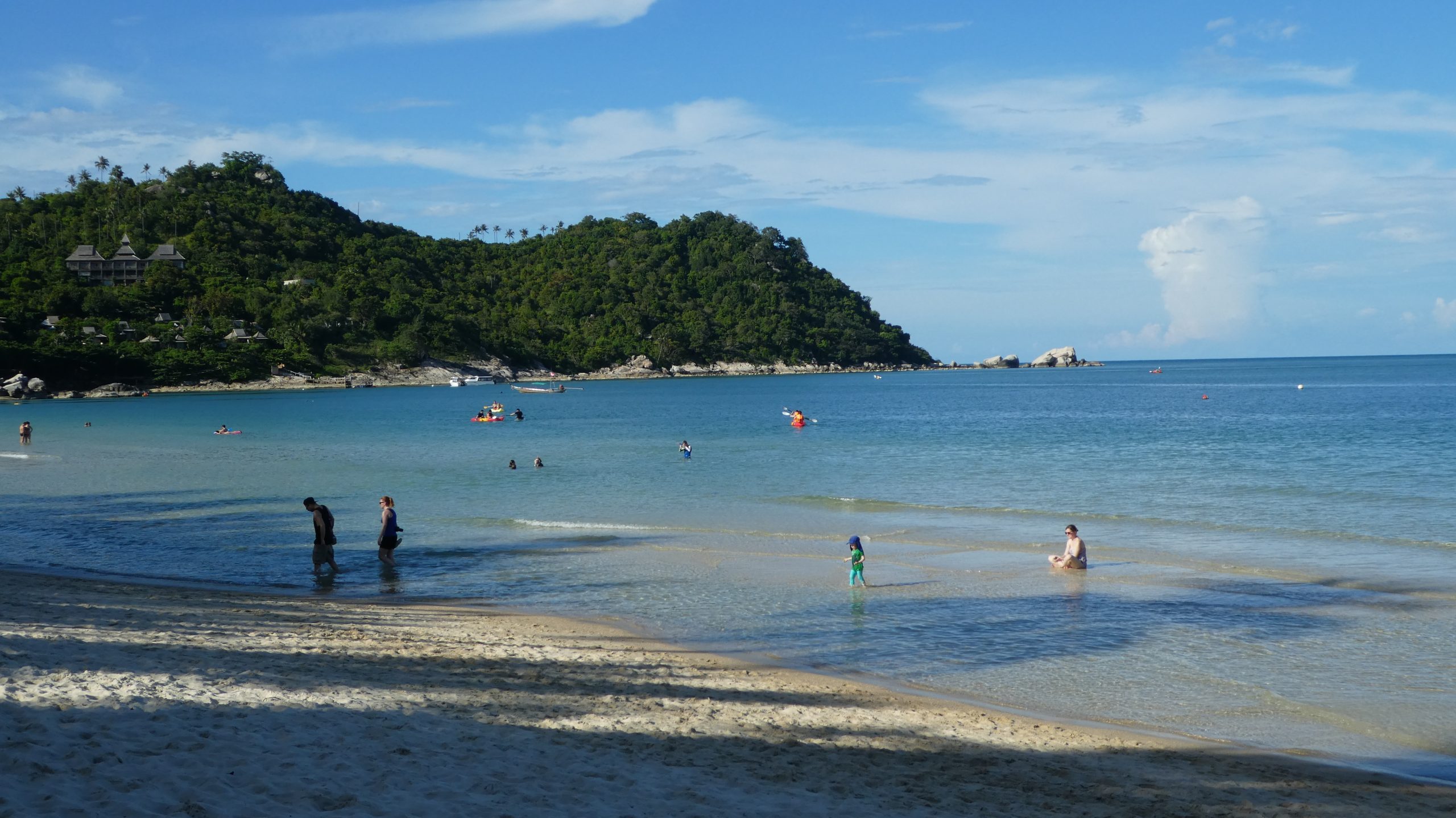 Thong Nai Pan Bay is one of the greatest and most beautiful bays of Ko Phangan. It is located in the north-eastern side of the island and divided into 2 small bays – Thong Nai Pan Noi and Thong Nai Pan Yai. Both bays are beautiful yet very different from one another.

Noi means small in Thai, and indeed this is the smaller bay, though it is more developed, busy, and popular than Thong Nai Pan Yai. You’ll find here 6 hotels – some of them considered rather fancy for Ko Phangan; while Burirasa is simpler and inexpensive, Anantara is luxurious and so are Santhiya and Panviman.

The beach here is narrower (mostly in its southern part) than in Thong Nai Pan Yai beach, yet it’s wide enough to allow beach chairs to be scattered along and has enough space to host festive dinners, sports games, etc.

The seawater is clean and pleasant and other than during the Monsoon season (October till December) – the sea is calm and great for swimming and kayaking. You won’t find here any jet skis, banana boats, and such.

Much like other beaches in the eastern side of Ko Phangan, there is no coral reef here to create a shallow beach (like in the northern and western beaches); there are no rocks or coral remainders either. The beach declines comfortably towards the sea depth, creating a bay with the deepest water in Ko Phangan, which makes it ideal for swimming all year long.

Unlike many other beaches in Ko Phangan, the beaches of Thong Nai Pan bay are barely affected by the unique high and low tide of the Gulf of Thailand – which is a great advantage!!

One of the few disadvantages, however, is the fact that several hotels were established on a relatively small piece of land, creating a busy beach that doesn’t allow intimacy, peace, and quiet. You can’t watch beautiful sunsets either – as Ko Phangan’s western beaches allow.

Right next to Thong Nai Pan Noi beach (around Burirasa hotel), there’s a small village, and from both sides of the road, you’ll find a nice variety of shops, restaurants, pubs, and massage parlors. It seemed to me that the shops were rather pricey and the massage was disappointing but I did find a lovely restaurant called JipShop restaurant, where we enjoyed a lovely welcome and great service of delicious Thai food.

In the evenings, you can pick one of the restaurants in the village or at the hotels – where dinners are held on the beach, accompanied by nice, short fire shows.

Noi means big in Thai, and indeed this is the larger, wider bay of the two. Though it is located right next to the small bay, the atmosphere, beach, and resorts are very different.

This beach is longer and far wider. You’ll find here similar sand, soft and pleasant, quite a few resorts, and very clear water, just like in Thong Nai Pan Noi. However, the fact that the beach is larger and more spacious, creates some distance between the resorts, so the beach is much quieter and calmer; its pastoral atmosphere is nothing like the busy feel of Thong Nai Pan Noi. The resorts here are hardly as luxurious but rather simple and humble – and of course much cheaper.

There’s no village around with shops and restaurants either, so if you choose this beach – you’ll get to enjoy a pastoral and calm experience and eat in simple resort restaurants on the beach.

Thong Nai Pan is a great choice for families. Consider that Thong Nai Pan Noi is crowded and busier with resorts and hotels of higher quality, while Thong Nai Pan Yai is more spacious and quieter but offers simpler (and cheaper) accommodation.