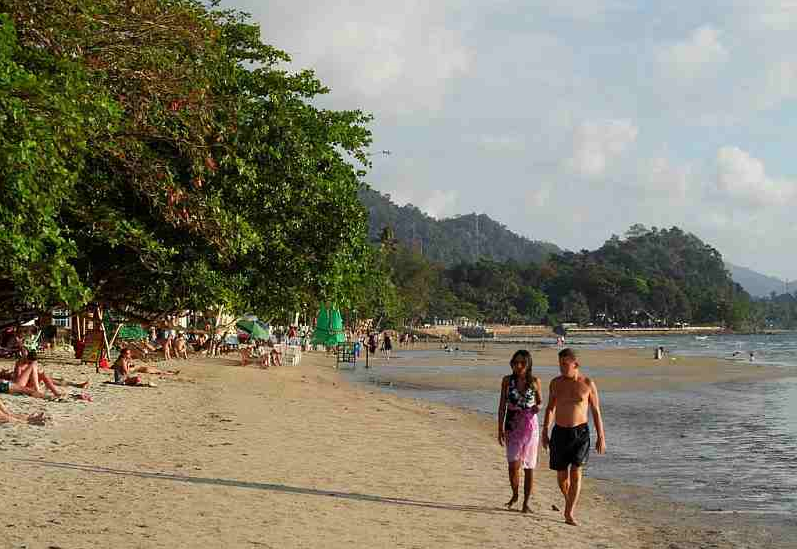 As Ko Chang island is fast becoming the target of many tourists and I received quite a few requests to write an article about it, I decided to write a general article about this island at this time, and elaborate more about it in a different article later on.

Generally speaking, as Ko Chang island is undergoing a fast development period nowadays, I prefer to visit it again, in order to write an updated article about it.

I visited Ko Chang a number of times in the past few years. You will find my opinion about the island, based on these visits, at the end of this article.

Some background on Ko Chang island:  Ko Chang, (the elephant island), is the second largest island in Thailand, (only Phuket is bigger than Ko Chang island).  The island is located in Trat province about 6 hour drive from Bangkok. It is estimated that 5000 people leave on it in a few villages found mainly on its east side which is not a tourist area.

The island, which not long ago was the target of backpackers and had only simple huts, is fast changing and many resorts are being built on it.

At this point in time the island is still relaxing so anyone interested in visiting it is better off doing it soon before the island become as crowded as Phuket and Ko Sumoi.

Ko Chang island Geography:  the island is mostly a combination of mountains and forests. There is a single circular road along the beaches. Despite its size there are only a few beaches on the island. Most of the beaches are rocky and the sandy beaches are mainly found on the island’s west coast.

This is the place to warn you that the circular road, (which can be seen in the picture), can be very steep and narrow with dangerous curves at times so it is not specially recommended to anyone… not even to those who want to exercise their driving in Thailand!!!

For this reason most of the resorts are located on the island’s west coast and this is the part of the island where most tourists visit.  You will hardly see any tourist on the island’s east coast, the side facing the main land. The east coast is slowly developing and mostly targets the local people.

The beaches in White sand are considered the best on the island but I would say that in comparison to other beaches in Thailand, such as Hua Hin, Koh Lhak and other islands beaches they are mediocre.

On this beach there are many resorts, shops, massages, etc. This is the most vibrant beach in Ko Chang, but it is not as good as other beaches, beginning with the high quality ones such as Koh Lak and Hua Hin and ending with the lower quality beaches – Chaweng beach in Ko Sumoi or Patong beach in Phuket.

During the evening you can see a fire show and there are a number of pubs or you can enjoy dinner on the beach at one of the resorts. It is nice but not unusual.

Even on White Sand beach there is not much to do during the evening. You can sit on the beach, walk around a little or go to one of the simple pubs along the main street (which is the only street).

Down the road to the south, you can find other beaches. The next beach on your way is Klong Prao beach – looks much like White Sand beach but a little less developed. On your way south you will find Kai Bae beach and after it Tha Nam beach which is also known as Lonely beach. The famous Lonely beach is not lonely for many years now. This is the beach where young tourist go and it has plenty of cheap resorts. The beach itself is rocky but the parties during the night probably make up for it.

You can travel from beach to beach in a Songato, which is basically a kind of a pickup truck going back and forth on the circular road, (their drivers can be pretty wild at times), beginning at the ferry stop and all the way up to the island’s south coast. The tickets cost 50-100 Baht depending on how far you want to go.

Bang Bao Bay:  you can’t write about Ko Chang without mentioning one of its greatest attractions – Bang Bao bay and the fisherman village there, baring the same name.

Bang Bao bay is located on the south end of Ko Chang west coast. It is situated at the beginning point of the different agency tours – fishing, snorkeling, visiting other islands. There is a long pier there going into the bay and at its end you will find a lighthouse.

There are many buildings on both sides of the pier, built on posts on the sea. You will find a lot of shops, travel agencies, plenty of restaurants and guesthouses for overnight stay.

Ko Chang island attractions:  It is hard to say that there are plenty of attractions on Ko Chang.  Nowadays you can find zip lines from tree to tree like the ones you can find in Chiang Mai area and in Chonburi province. I did not visit there and hope that next time I’ll be there I can look into that and write about it.

Apart from that you can also take a fishing boat or a snorkeling cruise and visit the nearby islands – which I did but found it mediocre and not half as good as similar attractions in south Thailand. My feeling is that the attractions you can find on Ko Chang are not so great – a small stream is called a water fall and a few small fish are considered snorkeling. In other words, the attractions at Ko Chang are simply not the best.

Summary: Ko Chang is a nice island, it is very quiet in comparison to other crowded islands such as Ko Sumoi or Phuket.

How to get to Ko Chang island : there are a few ways to get to Ko Chang. The simple way is to take a van from the Bangkok Central Van Station. There is one leaving every hour on the hour, not far from Victory Monument in the center of Bangkok.

If you are driving to the island, you can easily take a ferry, (with your car), from one of the piers. The best pier is Tammachat, which is the nearest to the island, so that the ferry is short, only 25 minutes.

Recommendations and Conclusions: As I wrote in the beginning of this article, here are my recommendations and conclusions from many visits to Ko Chang. I must say this is my personal opinion after comparing Ko Chang to other beaches and resort areas and Islands I have been to.

By itself, Ko Chang island is OK.  The beaches, even its best beach, White Sand, are mediocre. They are not as good as you can find on other islands and cannot even begin to be compared to resorts such as Khao Lak or Hua Hin or the wonderful beaches you can find in Krabi and other places in south Thailand. Ko Chang nature is pretty but not as breathtaking as in Krabi and other islands in south Thailand. You won’t find good quality on Ko Chang as found in other islands and resorts such as Hua Hin or Koh Lak and the nightlife are also not as good as in these two places.  The number of attractions on the island is limited and there is not much to do there.

The island has two significant disadvantages:

Summary of my recommendations and conclusions: I emphasize again, this in my own personal opinion – if Ko Chang was a couple of hours drive from Bangkok – it would have been an island worth traveling to for a short holiday. The thing is that spending 12-15 hours on the way for a short holiday – is not worth it and for a long holiday – the island does not have sufficient qualities, attractions and activities to justify such a holiday and that even before considering the high resort prices. It’s possible that Ko Chang can replace Ko Sumoi, especially for tourists who do not consider nightlife as important.

Those of you who simply want a good quality holiday with wonderful beaches and lots of attractions – Hua Hin is much closer to Bangkok and offers much better beaches, magnificent wild nature and many attractions. If you are willing to do the long travel – you are much better off choosing south Thailand – Krabi, Khao Lak and other places which surpass Ko Chang in every possible way you can think of.

Note: During some month the quantity of rain in Ko Chang is the biggest in Thailand – 1000 mm a month.

In my opinion a holiday on Ko Chang is worth re-thinking before taking the decision.